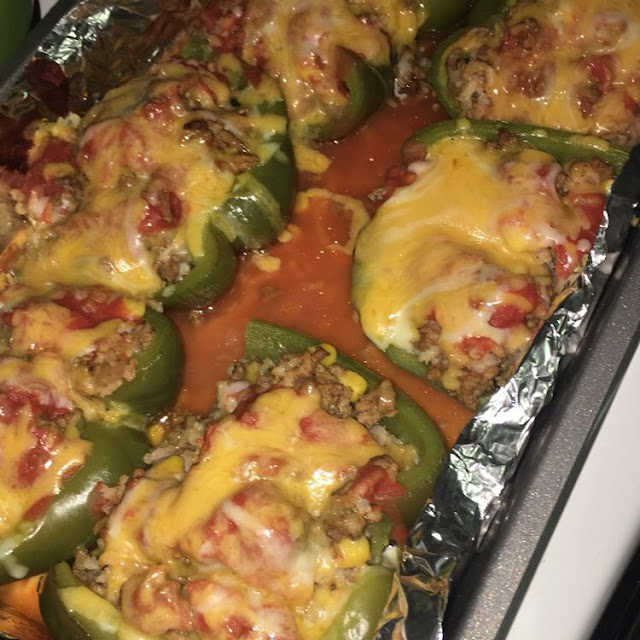 This is almost exactly how I make stuffed peppers. Except that I brown and season the meat beforehand, pour off the oil, mix in the remaining ingredients, stuff the peppers, and then cover during baking. I never baste…the steam does the basting for me.

The last five minutes of baking remove the cover and sprinkle grated mozzarella or cheddar over each pepper for added flavor if you like. Stuffed peppers are what dinner dreams are made of.

They can be filled with any combination of starches, meat, beans, and sauces, making them the ultimate leftover vehicle.

The peppers steam and bake in the oven into supple submission, making them a mostly hands-off dish. Stuffed Peppers are a fancy way to serve peppers!

They are so easy, delicious, and impressive enough to serve for special occasions or special guests! Hundreds of satisfied home cooks agree: this stuffed peppers recipe is a winner.

salt and pepper to taste

Bring a large pot of salted water to a boil. Cut the tops off the peppers, and remove the seeds. Cook peppers in boiling water for 5 minutes; drain. Sprinkle salt inside each pepper, and set aside.

In a large skillet, saute beef and onions for 5 minutes, or until beef is browned. Drain off excess fat, and season with salt and pepper.

Stir in the tomatoes, rice, 1/2 cup water, and Worcestershire sauce. Cover, and simmer for 15 minutes, or until rice is tender. Remove from heat, and stir in the cheese.

Preheat the oven to 350 degrees F. (175 degrees C). Stuff each pepper with the beef and rice mixture, and place peppers open side up in a baking dish.

In a medium bowl, combine tomato soup with just enough water to make the soup a gravy consistency. Pour over the peppers.

Bake covered for 25 to 35 minutes until heated through and cheese is melted and bubbly.