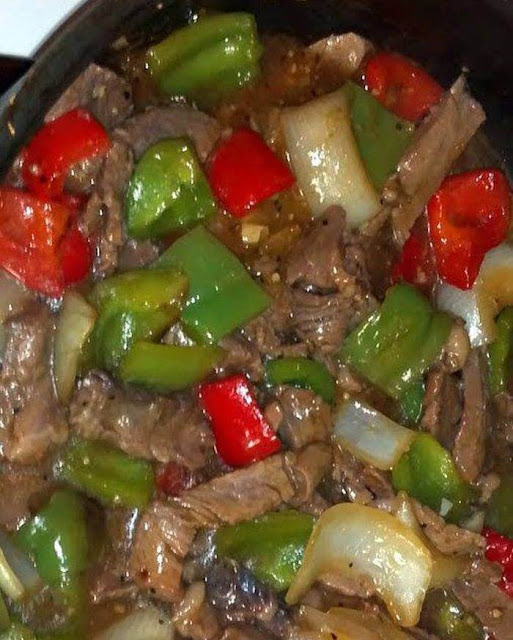 Crock Pot Pepper Steak
Tasty strips of sirloin are seasoned with garlic powder, then slow-cooked with onion, green pepper, and stewed tomatoes for this easy and comforting dinner.
It’s been so long since I’ve made Pepper Steak in the slow cooker! I never remember exactly how I made it the time before.
So I decided I better write it down this time! This Slow Cooker dish is very simple but has so much flavor. I love the taste of ginger and soy together. My favorite way to serve this dish is over rice.
I don’t know about you, but our weeknights are so easy during the school year.
Between soccer or basketball practice, church, and the kid’s games or school activities there isn’t a lot of time to cook dinner which is why I tend to just love using the crockpot.
This Crockpot Pepper Steak and Rice Recipe is perfect for those busy nights when you know you won’t have time to cook.
Thanks to this easy pepper steak recipe you don’t have an excuse to make dinner even on the busiest nights.

In a large bowl, mix together the flour and season salt then coat the meat in the mixture.
In a skillet, heat the oil, add in the meat, minced garlic, bell peppers (cut into strips) and cook until the meat starts to brown.
Remove the meat and peppers from the skillet to a lined slow cooker leaving the grease behind.
In the skillet where we cooked the meat, add the stewed tomatoes with juice, and 1 can of beef broth to the oil.
Add the flour gradually while stirring until you make a gravy then pour it over the meat in the slow cooker.
Cook covered on low for 8 hours.